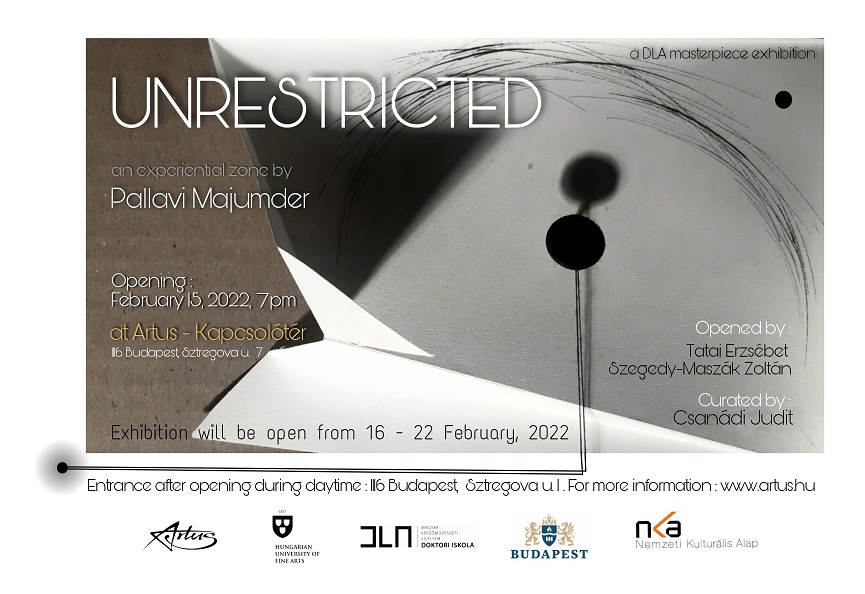 The exhibition intends to create an experiential journey for the viewers into an unrestricted, uninhibited entry through the open door of one’s psyche…to one’s mental space. The viewers are invited to become a part of the work while they move within the created ‘sensitive and ephemeral walls of memory and conscience’. A sensitive psychological experience of entering someone’s hidden inner space and also rediscovering oneself through the obscure layers of one’s existence which seems to be personal but is universal in respect of the absurdities and epiphanies that life offers to each of us is what the Installation mainly focuses on. The viewers act as entities, personalities, events, experiences or memories that are unrestrained and unopposed to enter a personal cognitive space, and through their own subjective journeys and interactions they become a part of the work. Through their personal interpretation of the work (journey) they now create their own experiences and look out for new words of explanation of such un-wordable, inexplicable, metaphysical inner dialectics, henceforth intervening the ‘unrestricted’ doors of his/her own mind. This absurdity of interaction between the two unknown realities (the work and the viewer)…the duality and counteraction of two entities in involvement producing impressions on each other through personalized navigation, interpretation and experience, while manifesting their individual existence – is what this interactive exhibition is aimed at.

PALLAVI MAJUMDER is a painter and installation artist from Kolkata, India. At present, she is a final year PhD student in the Doctoral School of the Hungarian University of Fine Arts, Budapest. Pallavi’s works have been selected and awarded in various National and International exhibitions and workshops in India, China, Japan, Czech Republic, Bulgaria, London, and Hungary. She has also been invited to present her papers and works at the international Symposium “Sharing Borders” in London by the Slade School of Fine Arts, UCL in February 2019, and at “Responsibility of Freedom” conference at MOME, Budapest in October 2021. Her research basically deals with “unexplained” states that we often experience yet fail to express. Her works aim to provide a “container” for the objectification of the unexplainable emotions or incomprehensible situations that float but are also deeply rooted, that share the borders of the known and unknown, the relatable and unrelatable, the recognized and unrecognized, the visible and invisible. These states, which she remarks as “cledons” are mostly portrayed in her works that are not always necessary to be explained or understood but are somewhat to be solved.