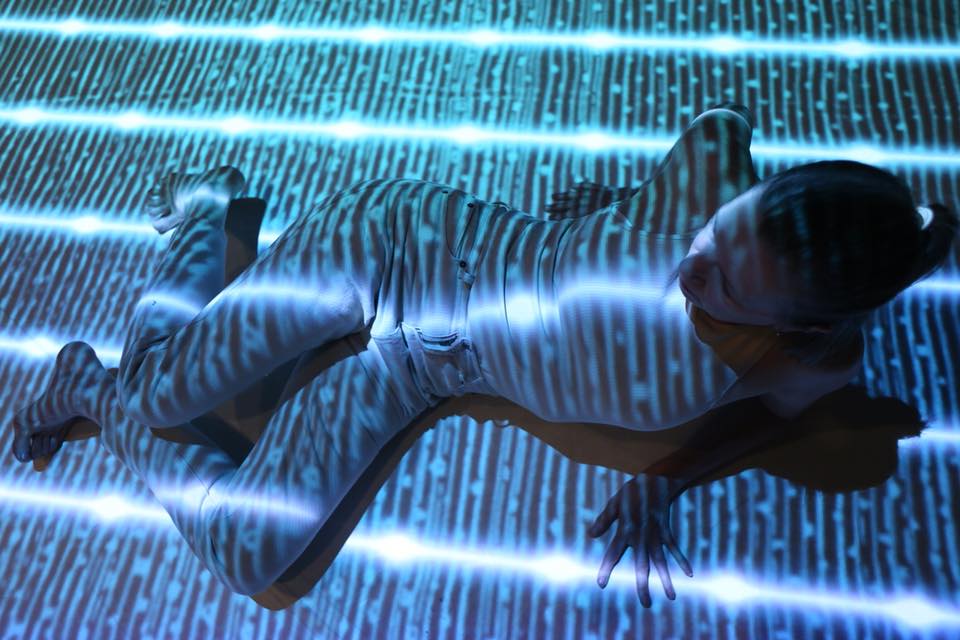 It is happening (between you and me) arose by an interest in empathy, morals and their manifesting physicality. Bodies that are permeated by the presence of others, observed postures and gestures, that are immersed in conscious and sub-conscious physical observations. Mirror neurons play a role in the recognition of the other and the possibility of being connected ‘wirelessly’ with others, feeling what they feel or is it feeling what I would feel in a similar situation?

It is happening (between you and me) is a performance where the body gives rise to the uttering of a fragmentary text and in turn the spoken text calls out a specific body. The text was written through a physical practice as well as inspired by found texts in writings about the body. The space is formed by the sound and projections created by Hungarian media artist Kristóf Szabó – KristofLab.

Sybrig Dokter (SE)
is a choreographer and performer in the field of contemporary dance, visual arts and contemporary theatre. Sybrig was educated at Codarts, Rotterdam. After moving to Stockholm 1995 she initiated international projects in Eastern European countries and founded Lava-Dansproduktion with Benno Voorham in 1997. Sybrig has collaborated and worked with Peter Stamer, Aitana Cordero Vico, Anna Koch, Yvonne Rainer, Frédéric Giess, Litó Walkey and Matthias Sperling. Sybrig is a member of Weld Company in Stockholm since 2013.
www.sybrigdokter.com

Kristóf Szabó (HU) – Kristoflab
was born in 1988 in Győr. He is a visual and media artist. Graduated from University of Fine Arts, as a graphic designer (2012) and as an art teacher as well (2013). He won an Erasmus scholarship in 2011 to study in Dresden (Hochschule für Bildende Künste Dresden). Kristóf is member of the MAMŰ and Hungarian Artist’s Book Associationand the Ziggurat Project member which groups are experimenting with various co-artistic collaborations. He is fond of working with dancers or representatives of other branches of art. He took part in number of solo and group exhibitions in Hungary and abroad. More recently he is experimenting with the relationship of painting and new media art.
www.kristoflab.com