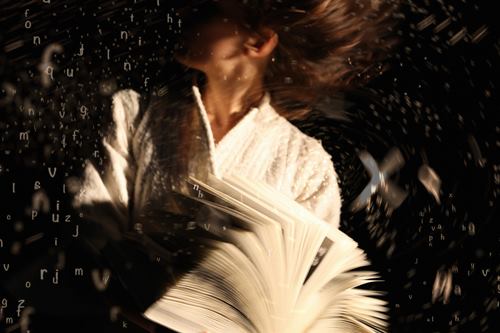 “… for they were at hand, yet unreacheable, present, yet ungraspable …” (László Krasznahorkai)

In many cultures, wind is a metaphor for the force that moves the world and man; it is something invisible that is perceived only through its effects. It stirs the physical world into motion, awakens it, destroys it, and makes it regenerate itself.

“Gate of the Wind” is the man himself, a passageway between the outside and the inside, between the world and the individual, between the material and the spiritual world. Wind passes through these worlds, connects and eliminates boundaries, and does not lead anywhere because it is present everywhere.

The performance „Gate of the Wind” is a continuation and a sequel of the issues raised by two preceding productions of Artus, namely „Drip Canon” and „Swarm”:

Where do our thoughts and feelings dwell? In our mind? Heart? Cells? In each other? In the network of our relationships? Or in our actions?

The production relies on movements drawn from Tai Chi Chuan, Shen Dao Kung Fu, and natural gestures derived from these.

Its musical universe is both minimalist and very rich, employing an apparatus that includes a harmonium, wind instruments, song, and human breath – all that makes use of the soft or wild movement and stirring of air.

The scene of the performance, both representing a spiritual and a fine art space, – as it is generally true for Artus – forms one of the fundamental elements of the production this time, too. The space means more than just a mere stage design or actual performance space – space is the content itself.Spacer

“Word to brain,
Brain to veins,
Veins to actions,
Actions to space,
Space to existence,
Presence.”