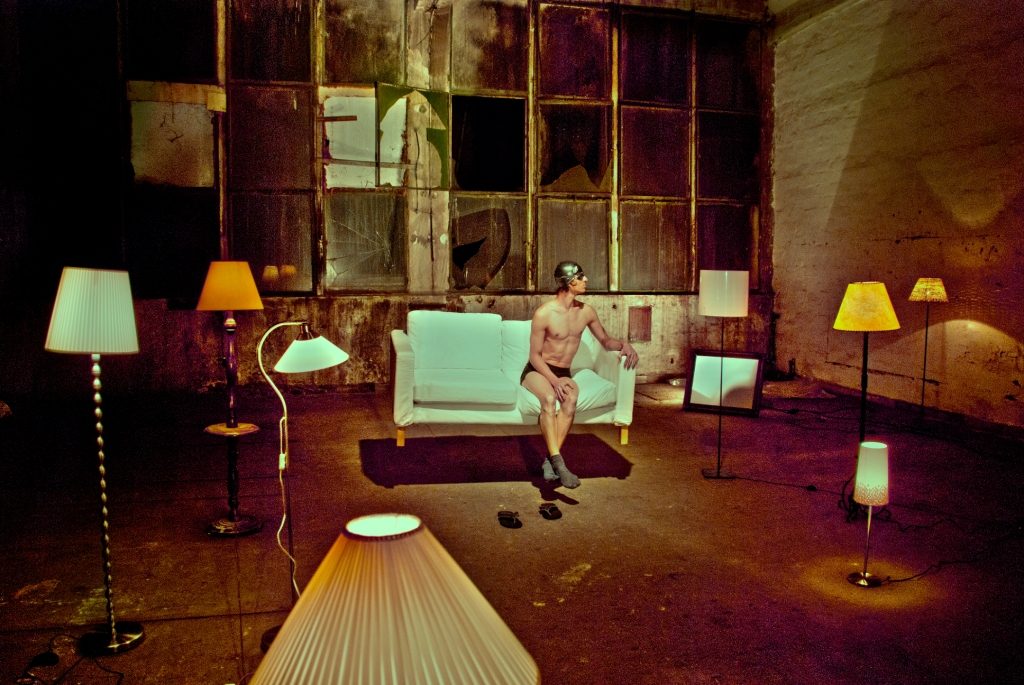 The myth of eternal return raises one of the most fundamental questions of mankind. Where is he heading, who is on the road his entire life?

Each of is a Ulysses, in a sense. For, inside, all of us are constantly travelling, and our world becomes whole, once we finally get home.

„The audience is seated in a cozy living-room-like space arranged for that single occasion, with sofas and coffee tables, in one of the huge industrial halls of Artus. The total abolition of the line between the performers and the audience is fully functional here: the spectators have the chance to experience that they are becoming the characters of an emerging myth themselves, thanks to the closeness of the performers.”

The creation of the production was inspired by:

1. Ulysses – and the myth of eternal return

Ulysses’ odyssey took 20 years in the epic poem by Homer. In James Joyce’s novel, Leopold Bloom roams through Dublin in a single day. In the frame of Ulysses’ Living Room the seemingly endless inner journey is condensed into a duration of a single theatre performance. Artus creates accordingly to Joyce’s writing: uncovering the texture of the vision like images of the inner journey, so that the different points in space and time occur simultaneously, like concurrent flash events in the mind, together with the impressions of what is going on in there.

The episodes of the Ephemer Works performance series contributed to the creation of the Ulysses’ Living Room as open work-in-progress events, with presence of the public. Each episode of the performance series, which debuted in 2010, is a premiere, unrepeatable one-off performance-event, which the creators bring to life during (and for) a single intense day. The spontaneity and elaborate precision are paradoxically present at the same time: the final form of each Ephemer Works event is given only in the presence of the audience.

„I was standing on a hill, and slowly turned around my axis. Simply turned around once, but did it in a single day, that is, in 24 hours. In exactly as much times as the Earth turns around its own axis. I was standing there for a full day, moving slowly, turning in synchrony with the Earth, becoming one with Her.

During the Turnaround the world redefined:
The immediate reality and visions are coexisting.
The Earth is not beneath my feet, but surrounds me.
Noise is a part of Silence. I am not standing here – I am standing everywhere.

One-Day-Turnaround is a rite and meditation, full of painful and uplifting contradictions at the same time.” /Gábor Goda/